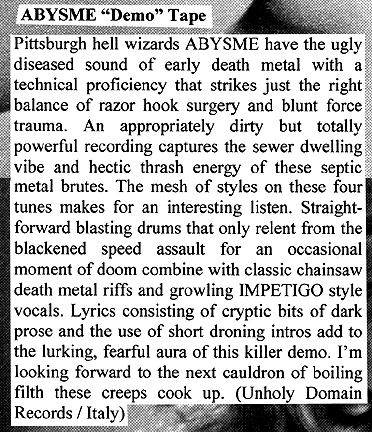 Abysme - Demo
From the dismal depths of the “steel city” of Pittsburgh here in the U.S. comes Abysme. These sickos play a dark and crushing form of old school death metal. It has influences from both Sweden, Finland and also from here in the American form. But Abysme also have a sound all their own. It is heavy and oppressing. The band blend the evil as fuck slower doom parts with some mid paced banging that thunders along and pummels the ears. Then the band can also get ripping fast and it all comes together so well! The bottom line is that these guys are brutal, heavy, sick and crushing! A very old school heart lies inside of these guys as well. The sound just fits well together and the arrangements and performance overall is just killer! When the band slows it down, they get that Autopsy “Mental Funeral” style where the guitars slither around each other and the notes and riffs crawl around the song in an eerie dance of death. I hear some of those doomy Asphyx moments as well. These maniacs will be working on releases with Blood Harvest Records as well as Unholy Domain Records (you can get the demo there on the Unholy Domain site!) Abysme has played with the likes of Wolves in the Throne Room, Rotten Cadaver, Midnight, Incantation,Nominon, Hellnation, Master, Cardiac Arrest, Deceased and Me and the Gravehill Horde (I have been keeping my eyes and ears on these sickos ever since that show!). HIGHLY RECOMMENDED!

Abysme -Strange Rites LP
I saw these maniacs while on tour in 2010. It was in their hometown of the Steel City of Pittsburgh. They sound like the teams Steel Curtain defense closing in on a ball carrier, and “putting him to sleep”. If you don’t know what that means, well it’s HEAVY and CRUSHING! How’s that? There are elements of both Swedish and Finnish death metal that comes up in the sound of Abysme. Great riffs with an evil as fuck tinge to them. Mid paced banging that mixes well with the blasting speeds of some parts. These guys really do sound like a band from Nokia or Upplands Vasby in 1991. The songs are written well and flow in a great way together. The pace is quick for the most part, the songs seem on the shorter end of the death metal spectrum. One of the things that I noticed is that some of the songs at times come to an end quickly. But this is fine as they don’t wear out their welcome and get boring. But just as some fast banging comes to and end, like the 3rd song “Formless”, there is a HEAVY slower riff that comes in to make you head bang until your head rips off. This is the type of stuff that reminds me of the old days. These guys have done their homework and seem to live and breath the real stuff! Although this band doesn’t slow down as much, some of the riffs and arrangements remind me of the classic “Lost Paradise” album by Paradise Lost, especially on the song “Annihilated Memory”. The vocals even have that deep bellowing old Nick Holmes growl at times, with the delivery. Just a bit higher of a pitch. There are also some elements of Autopsy “Mental Funeral” in here. BUT, the band can get ripping! I like how, with the amount of fast blasting parts that Abysme have, it is all done so well. At times these days, bands just do the whole Incantation blast away in a muddy reverb mess type deal, you can’t even understand what the fuck is going on. But here, you can hear everything crisp and clear. This is some killer old school death metal and a band to watch the fuck out for. Right now this is one of the better albums of this first quarter of 2012. The potential here with Abysme is INSANE as well. They might just end up becoming one of the best around if they keep this madness up! Fans of Convulse, Abhorrence, Uncanny and God Macabre GET THIS NOW! This is 10 songs of killer and crushing death metal terror that is essential! Yet another killer release by the mighty Blood Harvest Records!

Abysme -Strange Rites
Will Hellthrasher productions ever cease to deliver great old school goods? Well, for now, the answer is obviously no, because everything Hellthrasher offered this year was pure old school filthiness and Pennsylvania's Abysmes' lastest offering ''Strange Rites'' is no exception. Abysme are relatively new death metallers, and although their style may not be too intricate or mind blowingly original, they do the same mid-paced Swedeath worshiping just as good as the hordes of bands that worshiped before them. I can sense lots of doom influence in the turbulent mixture, so that the listener definitely gets an old school vibe, and the gut ripping chainsaw guitar tone is also set to its max. It's obvious that Abysme aren't savvy artisans when it comes to crafting their material, but by know you should know that it's quite possible to ignite a fire for a metalhead by creating simple, filthy and hateful music.

Abysme have extremely prominent Swedish metal tendencies in their music, and the tempos are quite varied, as stomping mid pace crushers all of a sudden burst into pulverizing tremolo picking mayhem, and then the heavy, intense riffing shifts smoothly into a sludgy death/doom dirge. All the tempo variation is really great since it captures the attention of the listener with every stroke, but the album channels between mid-paced grooves and doom laden mammoth riffs far more often than the flashier, more spacious and fast riffs. That doesn't necessarily make the album a doom album, but it shows that there's definitely a doom-oriented sound that's highly prominent and there's also a good number of Bolt Thrower-esque mid paced grooves, resembling ''The Fourth Crusade'' the most. In addition to the churning of these ponderous sludge oozers, Abysme can conjure up a vile and atrocious sound without completely overwhelming the guitar in a distorted tone and enshrouding the whole of the album with a dark, dense, chaotic atmosphere. Don't get me wrong, Abysme can add some atmosphere into the music, but the riffs are set to a more spacious and comprehensible mood, so you'll scarcely witness any inundating riffs on this album.

''Scribbled In Dust'' is a nice way to start off the album, a swift track with short length with some catchy, even groovy moments, mandatory for any Swedeath fan. The next track ''Beyond The Seventh Door'' has some Incantation tremolo picking sequences, and embraces the doom influence much more than the previous track. There are many, many compelling and hard-hitting riff to be found on the album, but you'll have to patient, as your search will need to get much more extensive as the album descends into an end. If you're not really the kind that likes to wait, then I can't say this album is very suitable for you. The people who like to wait, and flow as one alongside the album will get what they want, and complex or not, the chainsaw driven mid paced momentum of ''Strange Rites'' is a distinctive sound, a great attribute that highlights everything on this subterranean force of filthy OSDM.